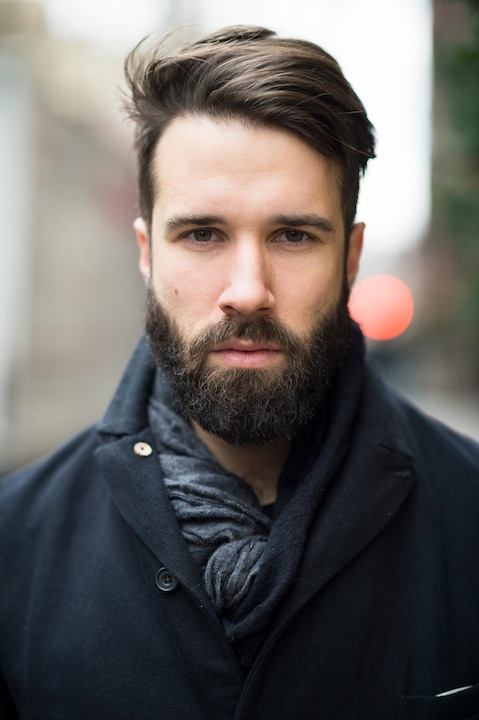 Adam Katz Sinding is a Brooklyn-based street style photographer. His work has appeared in the pages of Glamour, Harper’s Bazaar, New York Magazine, Vogue, and W among many others.

Absolutely not. I think you have to be comfortable to be stylish. Look at some women who can’t walk in heels — it looks ridiculous. I think comfort is super important. At the same time though, one of the designers I’m really into, his pieces are very uncomfortable. They have really high armholes and the sleeves are really, really tight — but I still wear them. I get bruises on my arms, but I still wear them.

Lazy. Black (the colour). And, I want to say minimalist, but I guess a more accurate description would be detail-oriented. I’ll wear something really simple but that has unique, intricate stitching. Or maybe I’ll wear a jacket that’s not super special, but the material is really amazing and you only notice that if you get up really close to it. Even if it just comes down to the way it’s constructed or the lines of the piece — stuff that no one really notices except for the person wearing it. It sounds really pretentious but I would really just rather dress for myself than for other people.

Overdoing it. Or dressing to fit a persona that’s not your own — it’s immediately obvious. I think it’s all about being effortless. And thus, lazy for me.

Sure. The person that inspires me the most, with regard to fashion, is Hedi Slimane circa seven or eight years ago, but I still look back at that stuff. People I look up to, photography wise, I’d say… Tommy Ton. He’s such an incredibly hard worker and he probably doesn’t need to be at his level.

Cotton, wool, and leather. Leather is not a fabric, but I’ll say leather anyway. I love exotic leathers like kangaroo, horse, and bison. I just bought a pair of boots from this store in San Francisco called Archive that are kudu leather, which is some sort of gazelle from the plains of Kenya. I had actually always wanted a pair of shoes in kudu leather but had never found the right pair.

In general, Paris. Definitely. As far as being adventurous, creative and open-minded — I’d say Copenhagen, or Tokyo. New York is good, but people definitely try too hard and spend too much money.

Style? I think you have to figure that out for yourself. But it’s just like anything else, you see things on other people and take little bits and pieces from everywhere and figure out what works for you. There are certain types of clothing and certain designers that I love, but they’re not right for my body type, so you have to find what works for you aesthetically and practically.

Colour. And sandals. They just don’t look right on me. I feel like sandals on men are slightly feminine. I also don’t think men’s feet are generally very attractive. I don’t know, I mean, I run a lot so the bottom of my feet are destroyed… But definitely not colour.

Everybody is different. As far as my aesthetic, the most stylish people I’ve met are some of my friends actually, so no real icons. I’d say my buddy Alex, who owns this store Graymarket, and Koo, who’s another photographer. They’re both pretty fucking stylish. Also, French editors like Emmanuelle Alt. Women who wear menswear.

I guess the early 2000s Dior Homme ad campaigns. I thought they were really pretty impressive. Nothing that I’ve taken. Everything I take, as soon as I take it, I’m over it. I was there and I know the whole story behind it, so there’s not as much cache to it than a photo I’ve never seen before. I do my website mostly as a diary for myself more than for anybody else. I also used to read my mom’s magazines like WWD, Harper's Bazaar and Vogue growing up — there were a lot of chicks in sheer tops and I was a little kid who wanted to see boobs. I would look at them just for that, but then I started getting into fashion. But yeah, mostly that Dior Homme ad campaign.

It changes. Like I said, I’m super lazy. I have around thirty pairs of amazing pants but I’ll literally put one pair of pants on and — I’m not even kidding — wear them until they rot off me. I just took a pair of pants to the tailor to get the pockets replaced because the pockets actually rotted. I’d put my phone in my pocket and it would slide right out. But they’re not done yet because I can put new pockets in them! They’re just shitty jeans, but they fit me really well and I like them.

I don’t think anyone has ever given me fashion advice. I’ll have to think about that one, but off the top of my head I can’t say I’ve ever gotten fashion advice from anyone. 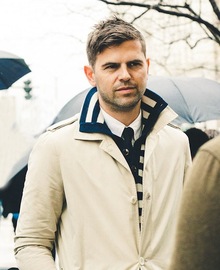 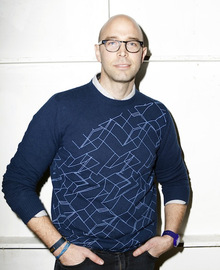